A starting player on the varsity basketball team since his freshman year, Junior Gavin O’Malley shares why this is more than just a game. 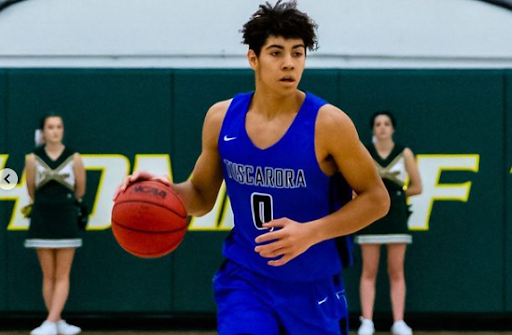 Many know Gavin O’Malley as a star player on the varsity basketball team. Making the Districts team (1st team) as his season finished, and most recently making the Regions (2nd team), O’Malley has truly accomplished an impressive amount of feats already. A junior at Tuscarora, O’Malley reflects on a sport that’s played a big part of his life for years.

“I started playing around 1st grade,” O’Malley says, “it was just like natural, my brother played before, and I kind of just played because he played.”

The power forward plays near the basket, and rebounds and defends against taller players. They do similar things to the center, who is the tallest person on the team.

In addition to playing for Tuscarora, O’Malley also does AAU, which is a travel league.

“I play on a team called LBA Attack,” he remarks. The team, he states, plays during the spring, after the season at Tuscarora has ended. “It’s spring, like now when we’re just starting.”

Besides playing for Tuscarora and for LBA Attack, O’Malley has his future to look forward to, as senior year is quickly approaching.

“I want to play in college,” he states, “I’m in the process; I’ve been trying to talk to some coaches and Coach Newkirk has been helping me out,” he continues, “I am still trying to figure out what I want to study but I am leaning towards Pre- Law,” he states.

While nothing is set in stone yet, George Mason and the University of Delaware are currently where he’s setting his sights.  Both of these schools have excellent basketball programs, with Delaware placing 4th in the CAA tournament and Mason having one of the best programs in VA.

Gavin says that he “looks up to his parents,” and that they are his biggest role models, but he adds: “I’ve had a lot of coaches that have mentored me,” reflecting on those that have aided him, “they help, being able to ask them questions.”

Basketball has made a profound impact on this young athlete’s life beyond just being a skilled ball player. “Basketball has taught me leadership, and how to take accountability for my actions,” he explains. “It also helps you learn how to work with people to achieve a common goal.”