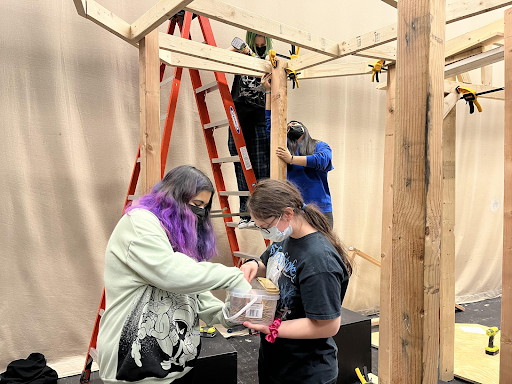 Everyone knows the faces of the amazing actors & actresses that work on our school’s theatrical productions; Charlie Brown, Into the Woods, Little Women, and most recently, TRAP! But what you don’t know is that there are kids behind the scenes who also bring these plays to life. These self proclaimed “techies” are in charge of lighting, costume design, hair, makeup, and set construction.

Tech director Ryan De Angioletti, a senior, is working on his last Tuscarora production, Beauty & the Beast, which he designed and built the set for. He also contributed to previous Tuscarora productions such as TRAP!, Little Women, and Into the Woods. “It’s been a lot of fun to design it and build it with everyone, and see it come to life. To the kids who are thinking of joining next year, do it, come after school and it’ll be a lot of fun.”

Junior Jordan Ayoub is the Light director, and is the understudy for Lefou in Beauty & the Beast. “I’ve been in tech theater for about a year and a half. I got into it because I was really interested in theater, but was too shy to go on stage, so I joined tech. The best part about working with lights is the creative liberty & freedom. You get to work with colors and designs and you truly are a part of the story telling.”

Junior Dillan Vanzego is in charge of the hair & makeup department, she is also a part of the musical, playing the role of Ms. Potts. “This is my second production doing makeup & hair, I would say that the best part about being a makeup techie is being able to be as creative as you want and having different ‘canvas’ to work on. I say if you want to do makeup and hair next year, then do it! It’s really fun and you don’t have to be creative, and have an attitude and try.

Elise Bradin is a sophomore, and this is her first year as a techie, and Beauty & the Beast is her second production. In TRAP! back in the fall, she worked on construction, the hair & makeup department, and was a part of the cast as a plant. “Theater is a great community and you make new friends and there’s always new techies, which makes it all the more fun!.