After LCPS approves a stipend that will go to school performing arts, Tuscarora's theater director and performing students talk about the this accomplishment and what they did to get to this point. 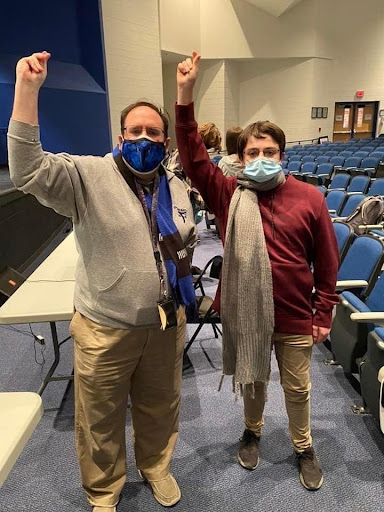 On Tuesday, February 3, the Loudoun County school board made the decision to adopt a 1.5 billion dollar budget for the 2023 school year. This has positively impacted many LCPS organizations, including the theater departments, who gained a 2.5 million placeholder from this vote.

Although this new funding is an amazing win, it took a long time to get to this point. Justin Daniel, Tuscarora’s theater director, detailed the beginnings of the fight;  “We first approached the School Board about stipends in November 2020. We started to see progress last January (2021) when we received one additional stipend for staffing, but that was a baby step. This large stipend proposal will allow us to hire more professional staff with training in the arts. It creates jobs and allows our students to learn more!”

The theater department has been discussing additional staffing for over ten years. Currently, volunteers such as Ms. Newmiller have been using their time to help out with the productions, as she is currently in charge of managing the orchestra pit for every musical. Because of this new bill, she could be paid for her work.

There is also not a full time choreographer or tech director. When asked about how Tuscarora was able to carry out productions without the extra help, Mr. Daniel pointed out that his own students stepped up and made things happen. “…we have a great community of student leaders. However, it isn’t necessarily equitable to have one adult staff member to train over seventy students year long after school.”

This led up to February 3rd’s school board meeting, where parents, students, and teachers showed up and held signs, demanding that the school board allow more funding for high school theater in Loudoun County.

Maryam Barokah, a freshman at Tuscarora, attended the meeting and talked about what inspired her to go, highlighting the unfairness between performing arts and sports funding; “When I heard that the theater department only gets about 80k dollars and the sports department gets about 4 million dollars, my breath was actually taken away. I know a lot of people within the theater and sports departments and I thought about how each school activity impacted the people participating. Being a theater kid myself, I’ve noticed how much passion everyone has and the amazing skills we’ve developed in theater that will be useful in the future. These skills, such as public speaking and confidence.”

Another student who went out to the meeting was sophomore Ava Peach, this was her first time attending, and she states that it won’t be her last. “Our teachers deserve to get what they need.  The sports get around 4.4 mil for the total of their seasons, but theater is not even getting half of that for three full seasons.  It’s unfair and unsafe,” she stated.

The theater department has finally gotten their wish for staff funding, but there are more improvements to be made. While the auditoriums in newer schools have the latest technology, older schools have auditoriums that are outdated and could possibly be a danger to students and staff. But for now, it’s better for things to happen one step at a time and it’s great that the performing arts are getting the funding that they need.