A Deep Dive With the 2022 Senior President, Shoebur Rahman

Shoebur Rahman, a Senior at Tuscarora and the President of the Class of 2022, gives an interview where he talks about serving as president, what he has done while at Tuscarora, and what he plans on doing after graduation. 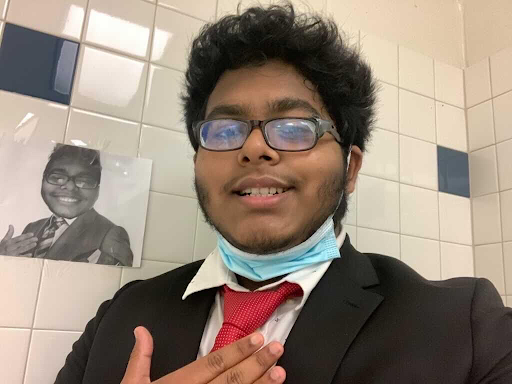 Shoebur Rahman is probably one of the most popular and well known students in the Class of 2022. Rahman started to gain popularity Freshman year where he sold his own exclusive merch. During Junior year, he officially became the President of the 2022 class and held onto his title during his Senior year.

Rahman highlights his victory when it was first announced that he was elected the class president. “To put it abruptly, it has been quite the honor. The road to my landslide victory is paved with nothing short of hard work, sacrifices, and difficulties, years in the making. It was a long ride home. When I eventually overcame it all and eventually became President of the class of 2022, it was glorious,” Rahman tells us, “There was nothing more pleasant than seeing their smiles and cheers when I eventually made it, and nothing more euphoric than the ecstasy from crushing those who have opposed me, and thus restrained me.”

“I quite enjoy representing our class, especially so with my ‘unconventional’ personality; I don’t think that there’s a precedent for the president,” Rahman says, “I detest the idea of following the norm, the conventional method, and I’m glad that I was able to represent a minority in the diversity of thought.”

“As for the overall experience, I crave it,” Rahman tells us when covering his time serving as president. “People walk up to me and salute me, calling me ‘Mr. President’. True, there is the probability that people are doing it ironically, but I really doubt it; I feel passion radiating from their commemorations. Yes, it may have started off as a meme, but it has evolved into a lifestyle.”

Junior Abraham Recinos asked Rahman how becoming president has impacted him, to which Rahman responds with, “Becoming president was pretty important to me; I used to suffer from low self-confidence as a result of a pretty rough childhood. Oftentimes, I would think I was an embarrassment and a failure to my bloodline. I disliked who I was, how I was. My mannerisms, personality, everything,” Rahman continues with, “It took me a while, but over the gradual course of a few years or so, I became the more confident, ambitious individual that I am now today. Becoming class president isn’t the direct causation of my new confidence, however, it sure did help. Knowing that people not only supported me, but went out of their way for my sake really helped me keep my head up. Life is like an ocean; you keep your head up or sink! There isn’t a single waking day in my life throughout the course of my junior and senior years that I am not grateful for becoming Class President.”

While Rahman is proud of being elected as the 2022 president, Rahman says his proudest accomplishment while being at Tuscarora has been inspiring his fellow peers. “It does seem rather monotonous in comparison to what you may have been expecting me to say, however, I truly do believe that it is the most lasting and impactful one out of them all,” Shoebur starts, “I have worked my fair share on events and activities for the school, not much Junior year though due to the Coronavirus, and while they may have created beautiful, lasting memories that of which would resonate within the souls of my peers for decades, perhaps centuries to come, I think my inspiration towards others is, for lack of a better word, better.”

As well as inspiring his fellow peers, Rahman is also proud that he doesn’t fit the norm when it comes to someone holding a distinguished title such as class president.

“As you may know, I represent quite a lot of factors. I act unconventionally from the ‘precedent of the president’, as I previously stated. I’m not switching up my entire personality and mannerisms to fit a standard, but rather, embracing a more grandiose part of myself,” Rahman states, ”I sin. I frequently act inappropriately. I swear. I say rude things. I don’t do my homework if I’m not feeling like it. I don’t ask for permission when I don’t want to. I don’t pay attention. I’m lazy, fat, and arrogant. I’m a terrible person sometimes. What I’m saying is that I’m crude, imperfect, but I think that is good.”

“Perfection is not a standard that nature is intended to do, we make errors, and that shapes who we are. I embrace my imperfections, and in a way, I think that is perfect for the role of Class President, and thus, inspiring others not to conform to a normalcy established by society, but rather, to be true to themselves. That is, what I believe to be, my proudest achievement,” Rahman concludes.

Even though Rahman is well known for being the Class of 2022 president, Rahman is also a part of the Tuscarora news team, The Pack. “My podcast, known as ‘ShoobCast’, is intended to challenge the viewpoints of our predominantly leftist demographic school by discussing world-news, topics of debate and the political atmosphere of our modern day,” Rahman says, “It originally was intended for the purpose of, and I quote, ‘To trigger libs.’ Though the show has evolved quite a lot from what it was originally intended for, it still does remain, albeit partially, intended for me to depict crude opinions that would offend others for my entertainment.”

“I’m trying to get more ambitious with every episode, adding new features or themes. It’s a constant struggle between trying to actually get the episode out (perfectly) and conceptualizing it. With all of that being said, I hope you enjoy it!” Rahman concludes.

You can find Rahman’s podcast, “ShoobCast” on Soundcloud, Youtube, and Instagram (@shoobcast) as well as Rahman’s linktree, https://linktr.ee/shoebur .

Rahman is still undecided about what he plans on pursuing after high school, however, he has a few potential paths in mind.

For college, Rahman plans on heading to NOVA for 2 years and enrolling in the ADVANCE program after as it would then help him to transfer his credits to George Mason University.

“As to what I’d like to specialize in; as of right now, I’m looking into bioengineering, specifically, genetic modification,” Rahman says when talking about his intended major, “I’m really interested in CRISPR; I think that it is the future for mankind and that I should try to revolutionize it. Alternatively, there’s also alternative engineering. I’m particularly interested in alternative fuel, predominantly geothermal.”

While Rahman is thinking about pursuing engineering, he’s still keeping his options open. “Alternatively once again, perhaps I could join a branch of the United States Armed Forces, such as The Marines or The Coast Guard. I’ve always had a thing for serving my nation, you know,” Rahman says.

“Ultimately, I just want to leave this earth a better place than when I had entered it. It’s not an easy road, but I do believe that it is the right road. We aren’t built for ease, we are built for perseverance. I just hope that I make it,” Rahman finishes.

To conclude the interview, Rahman gave a message for the Class of 2022, stating:

“Dear Class of 2022, we are members of a generation that has been crippled, beaten, and robbed by circumstances of a nature that of which we cannot control. To put it bluntly, we have been given a bad hand. However, like a diamond, these pressures are what forged us into the beauty of what we are today. We have accomplished such an almighty task as a result of our perseverance and hope. Our road is forged from our determination, our drive to succeed. And I think that we must always be hopeful, because hope and faith is all that we truly have. It is a big world out there, and very soon, we must set out onto it and conquer it. Life isn’t fair, it will beat you down onto your knees, and keep kicking you after you fall down. It will keep pummeling you, on and on, and will ignore your pleas for mercy. But it is the flame within that allows us to keep standing up after each detriment. Let your issues play into your strengths, and, supremely, above all else, remain hopeful.
It has been quite an honor and pleasure serving you all as your president. While our roads will now diverge and separate, forever remember that we are a family. A broken, dysfunctional family, one on the bitter edge of divorce, but a true family nonetheless.”