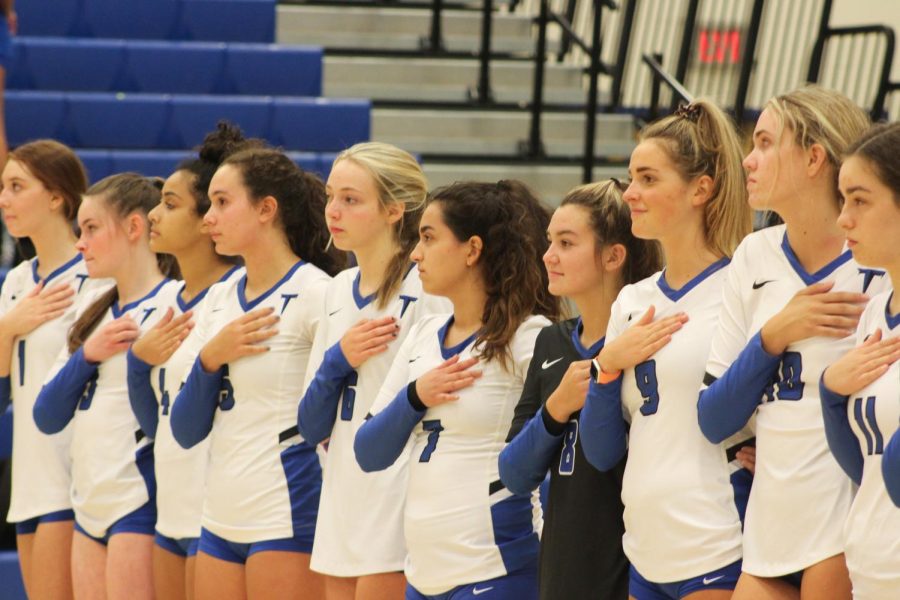 –{Leesburg, Virginia}– Tuscarora’s Volleyball team scored a dominant victory on Thursday over the Park View Patriots. The Huskies celebrated Senior Night by defeating the Patriots in straight sets. With that victory, Tuscaroa now improves to 8-6 in district play (9-10 overall) resting as the 4th seed in the Dulles District.

After starting the 2021 season 0-4 the Huskies have drastically improved, and are now sporting a three game win streak heading into the postseason. Senior Captain Kaitlyn Dunnigan commented on how the team has improved this season, “We work on a lot of in game type scenarios and we have made necessary adjustments to our lineup.”

The Huskies have moved around players throughout the season. This includes Dunnigan, who is committed to play division one Volleyball at William and Mary as a Libero has since been moved to outside hitter to fill Tuscarora’s offensive needs.

Tuscarora’s offense was led by Senior Captain Ashbey Cornwell on Thursday, “It felt great to beat Park View on senior night because we had so many people coming to watch.  So that win was very important to us. Our offense was focusing on playing smart, so we were hitting open spots and tipping the ball to score points which was working really well for us.”

Fellow Senior Shelby Wilson added, “for our hitters, the hitting line almost always got us a kill and our middles were dominating with pushing tips and hitting to the back corners of the court all night.”

With one regular season game left postseason preparations are in full swing. The Huskies face off on the 19th against the Broad Run Spartans in a key Dulles District match up. The last time these two teams faced off, Tuscarora defeated the Spartans three sets to one on 9/23. With a win over Broad Run the Huskies will face off against the Heritage Pride at Home.