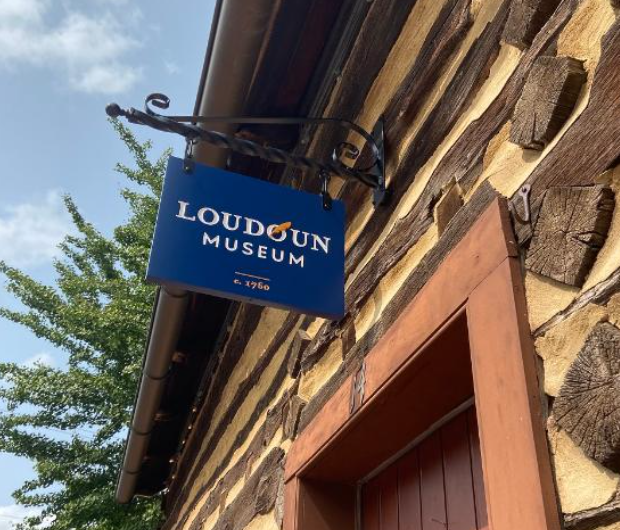 Loudoun County, Va- The Loudoun Museum appears as a quaint log cabin located at the corner of Loudoun and Wirt street, but what exactly is its role in the community?

I spoke with Lori Wysong, Visitor Experience and Collections Manager, to dive deeper into the history of the museum, what they’re doing now, and what the future holds.

The Loudoun Museum hasn’t changed locations since its opening, maintaining a unique sense of place in a historic building in downtown Leesburg. Wysong said of its founding:

“The museum was founded in the late 1960s. It was originally located in a log cabin which had been recently restored… Today, the museum is inside another historic building next door to the cabin.”

The Loudoun Museum’s responsibility for the local area and overall purpose is slightly unique. The museum’s mission statement reads as follows:

“As we strive to fulfill our role as the official repository for Loudoun’s history, our mission is to navigate Loudoun County’s evolving future, conserve Loudoun’s diverse and complete history, interpret authentically, and disseminate knowledge of Loudoun’s culture, history, and natural treasures.”

In addition to this expansive task, the museum has to adjust to ever-changing times.

As so many people and businesses can attest to, the COVID-19 pandemic was a surprise for the Loudoun Museum.

(https://www.loudounmuseum.org/)  the primary medium of public displays is through in-person experiences that include visually pleasing exhibits with primary sources or artifacts available for viewing.

In response to the shutdown, the museum began to work virtually, as many workplaces did.

Though the virtual exhibit style is more limiting than in person, the museum developed an interactive exhibit to help document COVID-19, and the lived experiences of Loudoun residents through the pandemic.

“The idea was that this could be not only a resource for the community during COVID, to stay connected with the museum, but also, you know, down the line, we have this documentation of a time period, that’s very unique,” Wysong spoke of the era.

The pandemic wasn’t the only major news event which the museum stepped out of its primary duties in order to respond to. Wysong told me of the museum’s response to the racial protests beginning in June of 2020:

“Following the events of last summer, the museum recognized that the protests would have historical significance in the future and accepted several items into its collection from these protests to preserve.”

The museum also released a statement at the time which details their stance “against bigotry and racism,” and solidifies their role in the community in combating such things:

“The Museum is committed to educating our community about the history that has led us to our present circumstance and will continue to build programs and exhibits that are inclusive and that support equity in our community.”

As aforementioned, the Loudoun Museum is a small building, and has a smaller staff to match its stature.

“We have a small staff, so we all sort of take on a lot amongst ourselves.” said Wysong in regard to her duties at the museum.

Such limitations can make curating exhibits difficult, as detail, clarity, and correctness is of utmost importance in museum curation.

“Any exhibit, no matter how extensive, can never totally encompass a subject. If museums tried to do that, exhibits would end up being very unfocused and hard to follow. Part of creating an exhibit is being able to effectively sift through a lot of information and consider what best contributes to the purpose of the exhibit,” Wysong said on the subject.

The Loudoun Museum is an integral part of Loudoun County, and from its beginnings has been a large part of the heart of culture and togetherness in Leesburg. Prior to the buildings which make up the Loudoun Museum being transformed for such purposes, there were a few businesses which made up the front-facing part of what is now the Loudoun Museum.

“In the 20th century there were a number of Black-owned businesses in the space, most notably the Do Drop Inn. The back part of the building used to be an Odd Fellows Hall, where members of a fraternal organization met.” As told by Wysong.

The Loudoun Museum has been around for many years, and always played a large role in fostering community in the area.

The work they do of documenting and displaying the history of Loudoun County will serve the area for years to come, offering a plethora of exhibits with information relevant to past, present, and future.