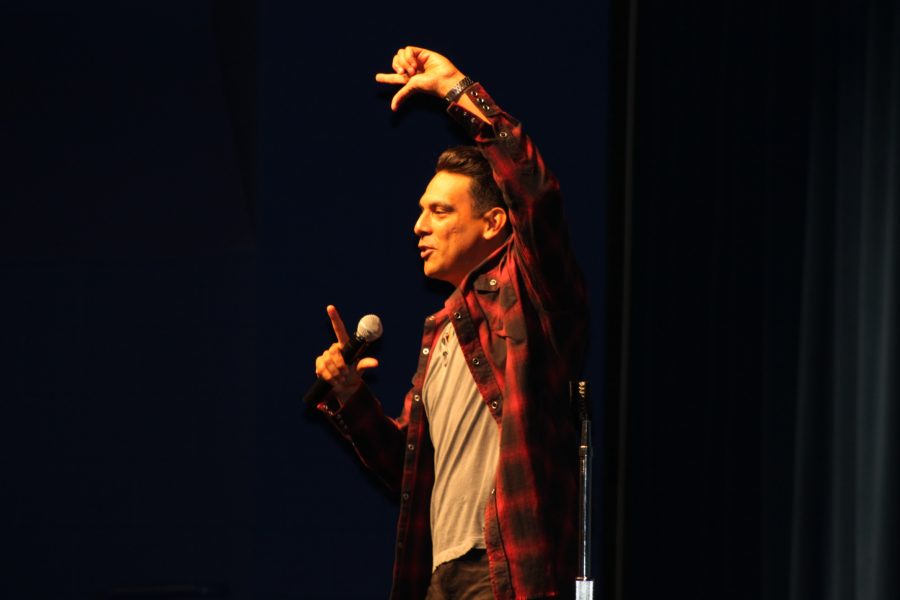 By Maria Schense and Katie Johnson

A popular phrase used to describe the United States is a melting pot filled with people of all different races, cultures, and religions. Virginia, and more specifically Loudoun County Public Schools, are no different.

In an effort to celebrate and promote the student population’s diverse backgrounds, the school has hosted UNITE for the last six years, as well as an annual Black History Month Assembly. For the past two years, Tuscarora has also put on a Hispanic Heritage Month assembly. The assembly focuses on a Hispanic speaker who comes and shares a personal story in the hopes of educating and inspiring all students to overcome challenges.

The keynote speaker this year was Gabe Salizar, a nationally-recognized motivational speaker who shared his story of growing up in California and trying to find his place in the different social groups in high school. He shared that his high school principal was his greatest mentor, helping him to get into college and changing the direction of his future.

“The presentation was great because I was able to relate to him,” said senior Ana Benitez.

“I like[d] the speaker and what he talked about. But I would like more culture about it and who were are,” said junior and Vegain Hernandez Cruz, who moved from Mexico when she was three.

Originally a week of celebration and recognition started in 1968 by President Lyndon B. Johnson, it was expanded and enacted into law as National HIspanic Heritage Month in 1988 by President Ronald Reagan, running from September 15 to October 15 each year. National Hispanic Heritage Month was created to celebrate the cultures, traditions, and contributions of people from Spain, Mexico, the Caribbean, and Central and South American countries.

Our new assistant principal, Mr. Fernando Monta ñ ez, has his own personal story connected to Hispanic Heritage Month. Monta ñ ez was born in New Jersey, but shortly after, moved to Puerto Rico with his family. “I am Puerto Rican but I am also of Jewish descent…English is a second language for me and I share a lot of common situations of the ESL population.”

He moved back to New Jersey right before his senior year of high school, and had to quickly adapt to a new lifestyle. “Having to learn the language, it was a real struggle. I did not not want to be in Jersey. It was culture shock,” said Monta ñ ez. Although Puerto Rico is a United States territory, the entire population speaks Spanish. So transitioning to a full English speaking school, one year before college, was a huge academic and social challenge for him.

Before starting his new job as AP in July, Monta ñ ez taught social studies at Woodbridge for 12 years. Prior to that, he taught psychology in New Jersey. While at Woodbridge, he was the head coach of the girls’ volleyball team and an active member of the athletic department.

Monta ñ ez also believes in the celebration of all minorities and wants to use his new position as assistant principal to work with admin, teachers, and students to help the school continue to implement different celebrations in honor of all the diverse groups represented in the student body. He explained that everyone should be informed and knowledgeable “on who their neighbor is.” Monta ñ ez stresses that, “The biggest enemy that we face is…ignorance.”

Benitez stated that so far, the school has done a good job at recognizing all the diversities at Tuscarora and she also loves the addition of Spanish music in the hallways during this past month. Monta ñ ez agrees, saying that he loved to hear the music played between classes. Playlists were created by the world languages department to coincide with Hispanic Heritage Month.