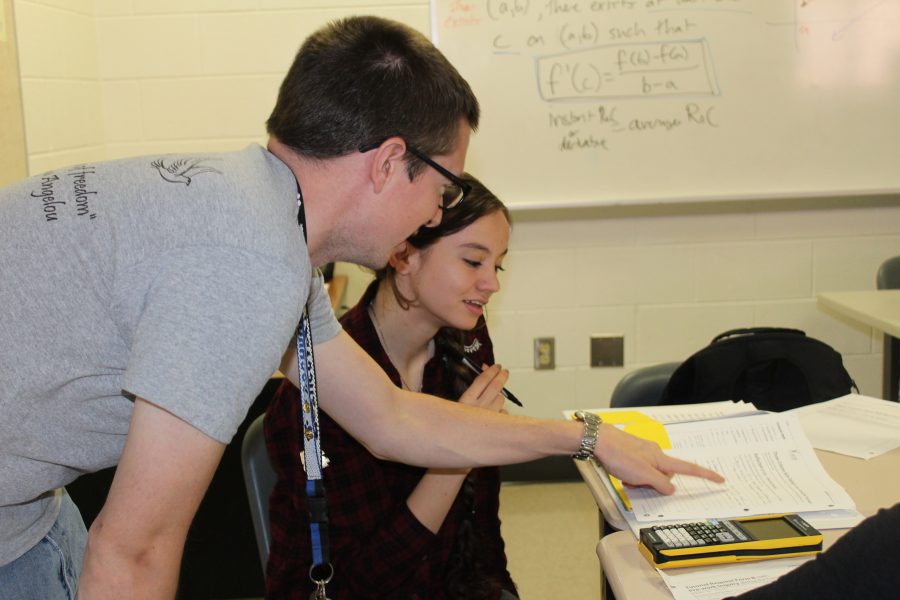 Many schools across the  United States have decided to take a new approach to teaching, and flip the learning style. According to Vanderbilt University, a college where many classrooms are in the inverse style, said that, “Flipped Classrooms…are defined as a method by which students gain exposure to new content outside of class, typically through reading, lecture videos, or power points.” To sum it up, the whole idea of teaching is reversed, so the students take the notes at home and then come to class to work on homework and ask questions.

Crisp explained that, “Having more advanced students, students that are definitely more focused on college as being part of their future, I knew that they would be more motivated to get their notes completed beforehand which is when it’s more effective.”

Crisp had been wanting to try the flipped classroom set-up for years after seeing many other teachers from different schools execute the plan. Since then he has attended many trainings geared especially towards flipped classrooms, and this year felt prepared to make the plan a reality.

This reality not only changed the way the students worked, but also the way Mr. Crisp goes about his day. He said that, “My entire day now is working and talking with students, which is one one of my favorite parts and as a teacher I feel like it is definitely one of the strengths of mine.”

There are many different perspectives on the new setup, as there is for anything new. Caroline Johnson and Anna Chalmers, juniors in Crisp’s first block AB Calculus, recognized the possible negatives and positives of the new situation, based on their own first impressions. Chalmers claimed that a potential negative of the setup would be that, “[There is] a lot more one-on-one time with your teacher, and that really helps [because] if you are not understanding something he can break it down for you in a way that you’ll understand it.”

However, Johnson said that, “Some   negatives are while you are doing the notes sometimes you have  no idea what is going on, and it’s kind of fast paced.”

And as the new setup has been a change for the high school students, it can positively or negatively alter stress levels, as will any new introduction into a high schooler’s life. Johnson said that, “It decreases my stress because I don’t have to worry about finishing the homework. It’s just do the notes and then homework in class.”

Chalmers agreed with Johnson as she said, “For me, it decreases stress because instead of having like an hour’s worth of math homework that you don’t really understand and are doing by yourself, you’re just watching a 20 minutes notes video and doing practice problems. It really takes some stress off in terms of homework load.”

However, there is the ongoing debate of whether or not the flipped classroom actually improves test scores, or overall class scores. While it may be a bit to early to tell for this class, tests have been done in neighboring schools. At Bullis School in Potomac, Maryland, a calculus teacher did the same flipped classroom and, “78% of her students scored a “4” or “5” on their AP exam—up from 58% the previous year—and none scored below “3.” With tests such as these, it is hopeful that Tuscarora will experience the same change. Crisp said that, “I feel like it’s going well so far, and overall the first test scores are already reflecting that.”

Like any normal classroom style, the success of the students not only depends on how they individually work, but how the teacher executes the lessons or plans. Chalmers experienced a flipped classroom in middle school and compared it to this year and said that, “It did not go well [because of the way] that it was executed. [But] Mr. Crisp really takes the time to make sure that you understand it in class.”

Even though Crisp is always ready for the in-class questions or before and after school, the flipped classroom has also brought a new atmosphere during class. Crisp encourages the students not only to ask him for help, but has also found that the students are working together and helping each other with homework questions. Crisp said that, “The atmosphere is completely different. It feels a lot more like a giant study hall [or] study group environment than an actual formal class. And a lot of the normal stressors, especially for a math class, are almost eliminated.”

Based on students’ first impressions, the decrease of stress, and up-and-coming test scores, the flipped classroom in Mr. Crisp’s calculus classes balance out as a win for the math community.