One Team, One Goal, and a Lot of Chlorine 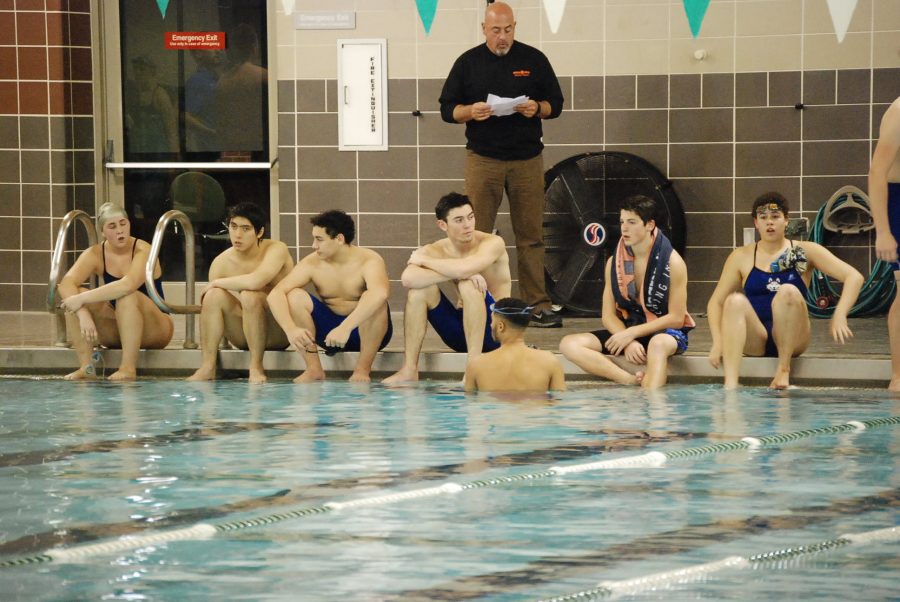 Wade in the Water- Tuscarora swimmers wait in the shallow end of the pool before they have to go and swim their event. Some will swim a few laps, and others sit and wait to be called up. Photo by: Sara Koochagian

In the spring of 2014, there wasn’t a guarantee that Missy Cundiff was going to be able to fulfill her dream of swimming for Tuscarora High School.  The Loudoun County School Board was considering cutting the swimming program so they could save $74,000 on the school budget, according to a Washington Post article. “I knew it was going to make me a better swimmer and when I learned that they might not even have it I was really upset,” said Cundiff.  However, through the efforts of over a thousand swimmers, parents, coaches, and even gold-medalist Matt McLean, who swam for Potomac Falls High School, the board decided against the cut.

Swimming has never been the most popular sport, with it being only the tenth most popular for boys and eighth for girls in the 2013-2014 school year for American high schoolers according to a survey conducted by the National Federation of State High School Associations.  However, that doesn’t mean that the few swimmers they have aren’t good.  For the first four years of Tuscarora’s existence, the swim team was right there on top of their conference.  The most successful year for the team was the 2012-2013 season, when eleven swimmers went to the Virginia State Meet.  Despite this, the qualifying rate went down from there, with only six swimmers the next season, and five in 2014-2015.

This year, 34 kids, all decked out in matching black and blue warm-up uniforms, board a bus every Saturday, unknown by the 2,000 high school students they pass in the halls every day.  It takes them ten songs to reach their destination, or roughly one pack of Skittles.  When the bus parks, they get out and form five straight lines, carrying out their normal routine of warm ups and stretching. “It’s not made apparent over the announcements, they never talk about us.  We’re cool too, and we are doing well,” said Cundiff on the current season.  With five practices a week, the varsity swimmers are feeling the burn, but no one is around to see the results, let alone hear about them.  “I’m always waiting for them to announce something about swimming, like ‘come out to the swim meet’ or something but they don’t.  It makes me really sad,” said Cundiff.

According to a poll run by Lydia Stonerook, only 27% (3/12) of polled Tuscarora students have ever been to a swim meet, which can actually affect swimmers performance according to Cundiff.  “Some of the best races I’ve ever swam were when people were on the other side of the lane cheering me on…it made me swim faster.”  Varsity swimmer Sarah Gill attributes the lack of attention of the sport to people’s limited knowledge.  “People don’t know what it means for the team to go in the weight room and that we run and do core work and workout every other part of our bodies.  People just don’t understand that.”

The same people probably don’t know how Tuscarora’s swim team is drastically changing.  The athletes are feeling a new vibe, which was brought along by a new coaching staff, head coach Kyle Gallo and assistant coach Dale Bostwick.  “It was a really big switch from last year to this year with the switch from Coach Getis to Coach Gallo, because I think they are really different coaches that give off very different vibes and this is a whole different season,” said Gill, “I really think Coach Gallo is re-inventing the team.” Other members of the team chimed in about the changes, saying that there is “more team spirit” and that the focus has changed from being “fun and hanging out” to “being stronger individually and a closer team”.

The driving force behind the growing success for the team and the swimmers individually comes from the team’s motto, “one team, one goal”. “From the beginning it was made apparent that everything we do we do as a team,” said Cundiff, “Coach always says we are only as good as the worst person on our team.”  This was made very apparent to the swimmers during one of their Friday dryland sessions. “We had to do twenty-three sprints around the school, one for every D and F someone had on the team because when we succeed, we succeed as a team,” Cundiff said.

Goals are also a big part of the new Tuscarora team, all stemming from last season, when the team got last place in the Conference 14 meet.  “I’m definitely on the Gallo-train to not get last place in Conference.  But if that doesn’t happen, I want something like that for next year,” said Gill.  Again, goals are made with the team, by the team. “I just try to do as good as I can because it’s not like I sit here and tell myself that I need to make states because as long as I come back from a meet or any activity knowing I did my best I’m doing okay,” said Cundiff.

In order to achieve the goals set by the coaches and swimmers, the team has dryland every day after school, and swim practice three times a week.  “Drylands are a good opportunity for the team to improve out of the pool but still stay in shape.  Coach works us really hard, but it’s all because he wants us to get better,” said sophomore Owen Fagerli.  The team lifts weights and do a lot of body weight exercises to improve their endurance and muscle mass, while also running and working on their cores.

While running and lifting weights is a relatively normal thing for athletes to do who are working towards a tough goal, some of the swimmers are using a, different, approach. “Some of us have been trying to create drag at practice, so we aren’t allowed to shave until Conference, and some of the girls are wearing tights.  When we take it all off, we go a lot faster, at least that’s the goal,” joked Cundiff, “we all just look like idiots, but hey, whatever helps.”

In just eleven days thirty-four kids, wearing matching blue and black uniforms, will board a bus to Claude Moore Recreation Center.  It will take thirty minutes, but they won’t know because they won’t be listening to music, they will all be too focused to listen.  They can swim up to two individual races in order to gain points for their team, eight, six, five, four, three, two, or one depending on what place they get.  The scorekeepers will tally up the points, and all of the 5A swim teams will soon learn if their hard work paid off. However, even if they don’t see the high numbers they have been reaching for, Tuscarora will continue to work for just One Team and One Goal.