TV Talk with Breanna #12: Get Political with House of Cards 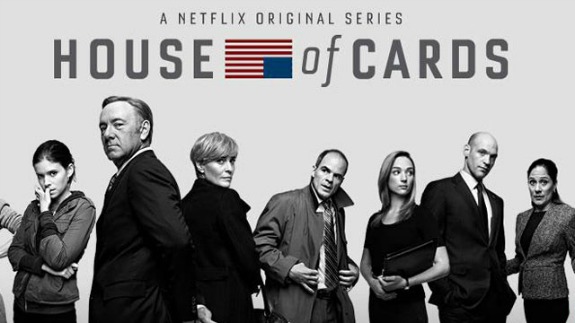 This article was originally written in March 2014.

During the last couple of years, streaming sites like Netflix and Hulu have broadened their horizons and started developing their own original television series. I remember being skeptical when I first heard about this new business venture; after all, these sites just streamed shows, so what do they know about actually making them? I was quickly proven wrong, and soon enough the sites started releasing shows like Orange is the New Black that became critically acclaimed and were watched even more than the network shows. This could be because instead of having to wait a week between each episode, an entire season was released at a time, which created a new phenomenon in itself: binge-watching. For fans of House of Cards, this is a great thing… because there’s no way you would be able to wait a full 7 days for another episode of this great political drama.

House of Cards, whose second season was released in February, follows Frank Underwood (Kevin Spacey), a ruthless South Carolinian Democrat and House Majority Whip who is turning the White House upside down. After a new president is elected, Frank is sure he will be nominated as Secretary of State, but when he is overlooked for the position, he decides to  get revenge on everyone who has betrayed him. Being the great politician that he is, Frank is ready to lie, cheat, and manipulate anyone in his way of getting revenge, and he shows this by blackmailing Representative Peter Russo (Corey Stoll) in order to get what he wants. With the help of his Chief of Staff Douglas Stamper (Michael Kelly), his vindictive wife Claire (Robin Wright), and the scandalous journalist Zoe Barnes (Kate Mara), Frank heads down the warpath in Washington DC, leaving broken careers and lives (and in some cases, even bodies) in his wake.

If you’re like me, you may be feeling a bit wary. As I don’t have the greatest understanding of politics, I was reasonably apprehensive when I first started House of Cards, but I soon found that I didn’t need to be worried. Although the political jargon and titles can get a little confusing, you really don’t have to have any political knowledge in order to enjoy the show. Politics is a major part of the show, but for me, House of Cards is really just about enjoying watching Frank create evil schemes to get back at his betrayers. But for fans who do enjoy politics, it has been said that House of Cards is one of the most realistic shows about Washington; in fact, even a senior member of the Obama Administration has said the only inaccurate thing about it is that an education bill could never pass as quickly as it did on the show in real life.

To be honest, though, I most likely would not have started watching House of Cards had I not heard so much praise for its cast. Spacey and Wright are both extremely talented, and are exceptional at playing such merciless characters. One of the best and most unique things about the show is that Frank often breaks the fourth wall by looking into the camera and sharing his thoughts about the people he’s working with, which really allows Spacey to give Frank character. Wright plays the very powerful Claire, and it’s refreshing to see a role such as hers, where the wife helps her husband with the scheming instead of being “too weak” to go along with it. Along with the superb acting, the cinematography is beautiful, and the writing will keep clicking the “Next Episode” button every time.

Being one of the first Netflix original series, House of Cards has certainly set the bar high for web television. Once you start the first episode, you’ll understand what binge-watching is really about, and you’ll see why 2% of all Netflix subscribers watched the entire second seasons during the first weekend of its release. The first and second season are currently available on Netflix, and the third season is set to be released in early 2015.