For One More Day: The Most Profound Ghost Story You’ll Ever Read 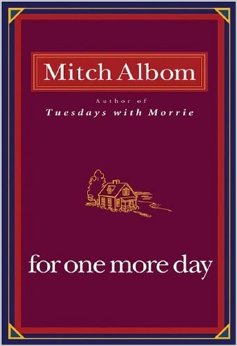 Check out Mitch Albom's novel, For One More Day.

Unfortunately, it’s rare to find books that are simply perfect for you—the ones that hit home and stay with you for days, months, or even years after you last put them down. Books whose quotes you want to carry around with you in your pocket; the ones that actually change your views on life. These sorts of books do not cross our paths every day, or else they wouldn’t be quite so special. Some people have yet to even find one. But that’s where I come in.

Although they are rare, there are always amazing books to be read, and, in contrast, awful ones that should be left on the shelf. And I’m willing to do all the work—each month I’ll let you know which novels are worth your precious, limited time, and which should be avoided like the plague.

Fortunately for you, I’m reviving this column with a novel very dear to my heart: For One More Day, by Mitch Albom. Although a short read (my copy is just under 200 pages), this story about a man’s growing appreciation for his mother and the discovery of his reasons for living is sure to stick with you for a long time.

For One More Day is essentially a ghost story; it retells the experience of Charles “Chick” Benetto, a retired professional baseball player, who, in an attempt to kill himself, finds instead that he has been reunited with his recently passed mother.  They spend a day together, in a strange dimension between life and death, and Chick recounts all his experiences since childhood that eventually led to his attempted suicide.

Although the surface of the story sounds grim and depressing, the substance of the novel is quite the opposite. One of the biggest themes throughout the book is that of motherly love; no matter how badly she was treated or underappreciated, Chick’s mother, much like most mothers, was unconditionally supportive, wise and loving. The emphasis on familial relationships, and how we treat those who love us, is the most thought-provoking aspect of the story, which will undoubtedly make you look at your family in a different light.

Most importantly, the story is written beautifully. Even with an interesting plot and heart-warming themes, a novel is void if not written well. But Albom most assuredly does not disappoint—his style is brimming with personality and articulation; not one word is wasteful, but all are so undoubtedly and unwaveringly in-character. The flow is much like a conversation—in a relatable voice, Chick’s tale teaches you brutally honest and profound lessons about life, dreams, and relationships.

As an award-winning writer whose novels have been made into Emmy-winning TV films and  plays, and has been featured on celebrity talk-shows, it should surprise no one that Albom’s writing is phenomenal. But you shouldn’t just believe the hype—you should witness it for yourself. All it takes is the first few lines of For One More Day, and you’ll be hooked. After all, who doesn’t love an insightful ghost story?