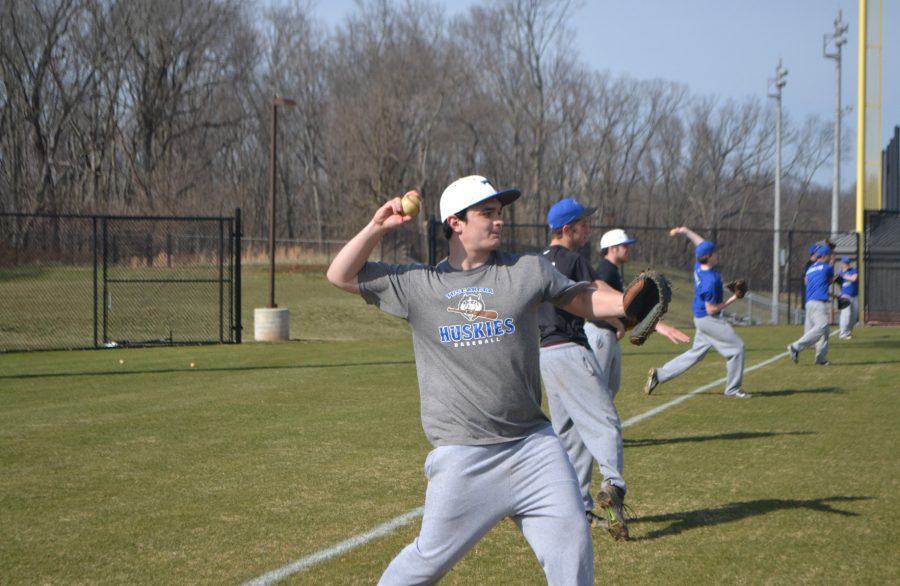 Senior catcher Brady Kaplan throws a pitch as a part of a drill at one of the Tuscarora baseball team’s practices. Photo credit: Hanna Duenkel

Mother nature hasn’t been kind to Leesburg over the past months, constantly teasing citizens with sixty degree weather that quickly turns into a blizzard. This has taken its toll on spring sports tryouts and practices. Most teams have had to practice in the gym, which hinders their performance. The boys’ varsity baseball team, however, has found a way to overcome this obstacle.

Starting the season with two crushing wins over John Handley and Park View, the Huskies show no loss of momentum. While games have been cancelled due to weather, the Huskies have stayed focused and worked hard to make up for lost time. “With cancellations, we have to play eight games in two weeks. We really need to play hard and stay focused on such a long stretch,” said senior Drake Etheridge.

So far, the team’s focus has been impeccable, especially on defense. “Pitching has set us up for the wins,” said senior Nick Lang. Junior Nick Guiliano added, “Great pitching by Gavin Wall and Cole Gabriele has played a key role in the strong start.” The pitching aspect of the game has been a highlight in the season and even made history.

On March 24, the Huskies crushed the Park View Patriots 12-0, an impressive feat in itself. However, the defense, led by sophomore Cole Gabriele, made it even more extraordinary. The statistics show Gabriele’s 12 strikeouts and two walks, but that’s not all he achieved.The game ended with the Patriots earning zero runs, signifying the first no hitter in Tuscarora history.

The momentum gained from this will help the baseball team through the tough games ahead. “Moving up a division will be tough, but if we keep up the strong defense we can be contenders in the postseason,” predicted Lang. Etheridge said with more confidence, “Moving up in the conference shouldn’t be too big of a challenge. We just need to play to the best of our capabilities.”