Once on this Island Premieres at Tuscarora 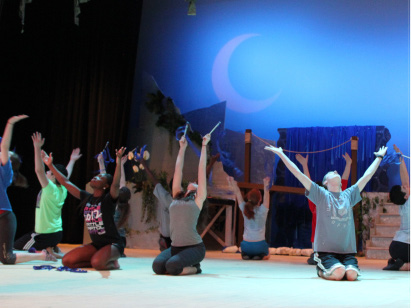 The ensemble of Once On This Island rehearses the song “Rain” for their upcoming performance on April 3rd, 4th, and 5th. In this scene, the two main characters meet for the first time. Photo credit: Brianna Meeks

Tuscarora’s thespians took the stage again on April 3rd, 4th, and 5th with the colorful production of Once on this Island. Filled with high energy songs and dances, the show brought the unconventional story to life.

Once on this Island was written by Lynn Ahrens and Stephen Flaherty, the same monumental composer and lyricist duo who created the musicals Seussical and Ragtime, as well as the score for the popular animated movie Anastasia. During its original run on Broadway from 1990 to 1991, Once was nominated for 8 Tony Awards, including Best Musical.

The show can be described as the classic Disney movie The Little Mermaid with an island setting, four powerful gods, and the distinction between social classes (though the original show focuses on racism as well).  The story follows the orphan Ti Moune (played by senior Alyssa Sera Josep) as she grows up under the care of her adopted parents, Mama Euralie (senior Gabby Evidente) and Tonton Julian (junior Ryan Phillips). Trouble arises when Daniel (junior Stephen Coakley), a grand homme from the wealthy side of the island, crashes near her home. Ti Moune falls in love with Daniel and follows him to his foreign home and life.

One of the aspects that made this show different from others at Tuscarora was the large amount of time the ensemble was onstage singing, dancing, or acting along with the leads. Freshman Meghan Muldoon shared, “People could see all their friends,” not just the small number of leads. Sophomore Hope Kircher agreed, saying, “It’s fun getting to spend more time on stage than we normally do.”

Another defining aspect of this show was the vivacity and literal color put into the production. Junior Chris Allen shared, “There’s a lot of energy. It’s different than a lot of the other shows we’ve done.” There were four major dance numbers that required a good deal of practice and endurance to learn and practice, augmenting the jovial, tropical atmosphere of the show as a whole. Even songs that did not have a tremendous amount of dancing required energy in the singing and acting.

Adding to the color onstage included unique sarongs for each of the girls in the ensemble, the stage floor painted to look like sand, and vibrant lights, designed and executed by the excellent lights and sounds team, seniors Alec Husemeier and Michael Simpson, junior Ernesto Cortes, and sophomore Nick Strigel.

Six Tuscarora students made up the pit band, which was led by Miss Katie Newmiller, Tuscarora’s band director. Additionally, students led by junior Brett Wood have been working on the set construction, building and painting various set pieces and props for the show. Some also served as part of the tech crew to help the cast with set changes for the performances.