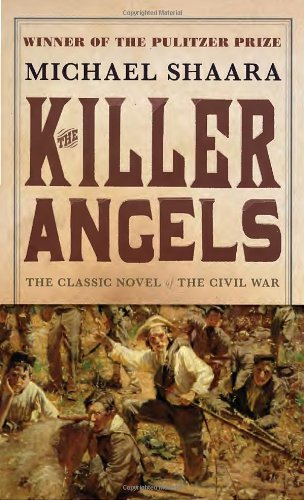 There is a phrase that most teenagers dread to hear come out their teachers’ mouths: Lit circle. It’s beyond being forced to read (or barely skim, as most opt to do) a novel that we ourselves would have never willingly chosen; Reading assigned literature for an academic class usually requires a certain level of effort, patience and self-discipline to push through some of the absolutely cringe-worthy  works that for years have been a part of the curriculum. As many current and past AP U.S. History students know, it’s not always easy to compel yourself to pick up a novel void of supernatural vampires and romantic moonlight scenes—instead, many had to choose between two books surrounding the American Civil War. For me, the choice was clear—An older friend gave me their copy of The Killer Angels, by Michael Shaara.

The Killer Angels is an odd book, entirely about the single bloodiest event of the Civil War, the Battle of Gettysburg, changing character perspectives each chapter. For one, the style is unorthodox, almost best described as stoic. Each sentence is an abrupt thought, a small burst of consciousness hardly ever elaborated on, which makes for a very choppy, sometimes awkward flow. At some points, the sentences were so incomplete and incoherent, that I found myself comparing them to Doge the internet meme dog (Much wind. Much heat.  Much exhaustion.  Much smoke.  Much wow?), which pretty much ruined the effect of a serious war novel. For me personally, it was very hard to get used to, and seemed to put restraints on the emotional side of the story, making a historical fiction story almost entirely based on tactics, and, regardless of accuracy, that didn’t interest me very much.

But somehow a little deeper into the story, I warmed up the staccato writing style, and there were some parts that I genuinely didn’t mind. Some characters, like Generals Robert E. Lee (Confederacy) and John Buford (Union) bored me endlessly, but Lieutenant General  James Longstreet, Colonel Joshua Chamberlain, and the rare chapter with Arthur Fremantle, the British Lieutenant who had come to observe the war, proved to be a little more interesting, and little more emotional, which for me, also made those characters a little more relatable. From time to time, a character would immerse into a real inner dialogue, and finally the reader was able to discern some characterization and sentiment. But in most cases, whenever the topic got too deep, the character brushed it off with a, “I’ll think on that later.”

The small glimpses of emotion didn’t make up for the annoying repetition throughout the book though. Oftentimes I found myself needing to flip back to the start of the chapter just to remember who the speaker was, because all of the narrations between different characters sounded more or less the same.  The characters hardly ever engaged in conversation, and when they did it was strictly war-talk, although they constantly observed the other soldiers laughing and conversing. Almost all the characters complained at least twice of being hot and tired in each chapter, and of being overcome with a “cold depression”. Now some may argue that this is merely because the heat, the exhaustion and depression were all things every soldier struggled with every day, which is probably true, but that doesn’t make up for the fact that it made for a very monotonous read.  There comes a point when I don’t really want to know about all times the character is thirsty.

Maybe I’m not very fond of a soldier’s façade, or maybe I need a more fictionalized historical fiction to be satisfied, one with some more side-story fluff and character interaction. In truth, The Killer Angels was a struggle to read, and although it gives me a better impression of The Battle at Gettysburg than our textbook ever would, it surely was no less dry of a read.

But even I would be hard-pressed to deny that the ending left the reader with an odd chill—and a very acute awareness of the immense loss of American lives during that last, infamous day at Gettysburg. Characters that were consistent and boringly impassive suddenly became wild, irrational, and even expressive. The abrupt glimpse of humanity within the main characters was almost disturbing after almost 300 pages of indifference, but also refreshing. The final impact was commendable, even if it took almost the entire book to get there, and truly got one message across: History, no matter who wrote it, always has two sides to the story.