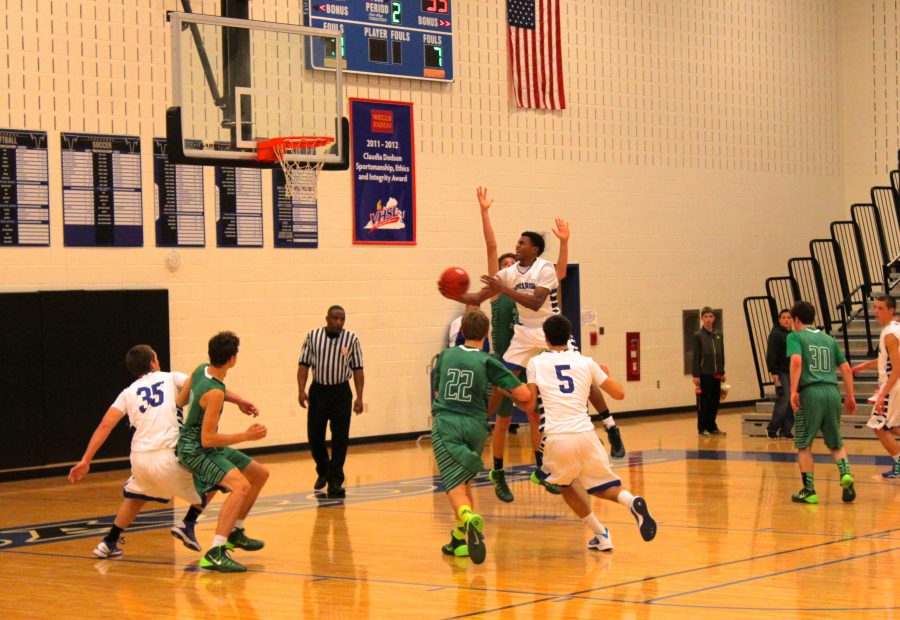 In the first quarter, Tuscarora trailed Woodgrove 21-16. Sophomore Kyle Copeland led the team to victory with 18 points and 4 deflections. Contributing were senior Tova Yarbough with 13 points and 4 steals, sophomore Zach Alcorn with 10 points and Dalaynte Blaylock with 4 assists.

“We started off really slow in [the] first quarter,” said Head Varsity Coach Allen Smith. “ I think what really got us was their defense. We missed a couple of wide-open shots which we had to make up for in the next quarters of the game.”

In the second quarter, the Wolverines maintained their lead with a few layups and easy shots. Woodgrove ended the first half with a 40-32 lead.

Tuscarora then took the lead, surprising Woodgrove by dropping countless 3-pointers which gave them the advantage and helped them end the third quarter with a 56-52 lead.

“I think we played really well as a team,” said sophomore Dalaynte Blaylock. “We played with strong defense and killer offense.”

Tuscarora led throughout the rest of the game, ending the night winning their home opener against Woodgrove.

“The team played really well the rest of the second half,” said Smith. “Overcoming their defense and strengthening ours was the key to winning that game.”

Smith then went on to say how excited he was for the upcoming season. “We look forward to playing this season. I think that the team is very excited, and we hope that we make our fellow Huskies proud.”

The varsity team wasn’t the only one to take home a victory that night, as the JV and freshman boys’ basketball teams also dominated over Woodgrove, ending their games with a score of 63-39 and 62-31, respectively.

The varsity team then went on to beat Thomas Jefferson (81-79) on Dec. 4 and increase their winning streak to 3-0 on Dec.5 by beating Marshall (80-77) thanks to a huge last second 3-point shot by Zach Alcorn.