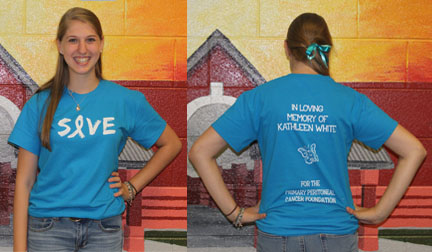 As part of her awareness campaign, senior Leah White and her family created a t-shirt honoring Mrs. White. Part of the proceeds from purchase of the shirt go towards PPC research. Photo by Meilan Solly.

It’s a word everyone knows. It lingers on the outskirts of life, maybe in the form of a distant relative or old acquaintance. For many people, it never wanders closer than that.

For others (13.7 million Americans and their families, to be exact), cancer is reality. It means an endless cycle of doctor’s appointments and chemotherapy and, most of all, uncertainty.

Meet Leah White. She is a senior, and this year she is using her personal experience with cancer to raise awareness for one of life’s many unfathomable experiences.

In August 2011, White was on a car ride home from her dance studio when she learned her mother had been diagnosed with ovarian cancer. Mrs. White entered chemotherapy and several months later had surgery to remove the cancer. At this point, the Whites learned that Mrs. White actually had primary peritoneal cancer (PPC), not ovarian.

PPC is a rare cancer that affects the peritoneum, a membrane that lines the abdomen. It impacts up to 10,000 women per year and is often only diagnosed in late stages.

“When they told our family that my mom had PPC, they also told us there was nothing else they could do,” White said. On October 25th, 2012, Mrs. White passed away.

Today, in honor of her mother, White is working to raise awareness for PPC.

She has created a Facebook event that invites people to wear teal, the official color of PPC, on September 6th (PPC Awareness Friday) and October 25th.

“I know that not much money is put into this foundation, and I thought this could be my way to fight back against the cancer, as well as to help others,” White explained.

Thus far, White has had a positive response to her campaign.

On September 6th, White’s first event day, teal was seen throughout the halls of Tuscarora. “People I didn’t know had lots of teal on, and that surprised me,” White said. “I even had friends in different parts of Virginia as well as different states wearing teal.”

On Facebook, in only three days White’s event had over 200 people signed up to attend. Friends, family members, and even strangers have given donations to the cause, helping White to raise several hundred dollars. Both Central Penn Parent, a magazine in Pennsylvania, and the co-founder of the official PPC foundation have also reached out to White.

In two weeks, the second event day will arrive. In the meantime, White hopes people will buy a new t-shirt her family has created, and that the school will become more involved in her campaign.

“I really want to try to help other families in the future who might have to go through something like this,” White said. “Even if they don’t find a cure, I hope that they can at least find a way to discover the cancer in a faster way, which would hopefully decrease the mortality rate.”
To help raise awareness for PPC, wear teal on October 25th. For more information, visit the event Facebook page (search “Raise Awareness for Primary Peritoneal Cancer”), the official PPC website (primaryperitonealcancer.org), and the Bravelet site (bravelets.com/products/ppc).