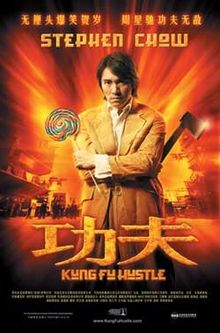 Everybody loves kung fu movies. There’s nothing quite like seeing one man take on hundreds of guys at once and go on a life altering quest. Kung Fu Hustle, directed by Stephen Chow, contains all of these elements and much, much more.

Released in 2004, Kung Fu Hustle was writer-director-actor Chow’s second overseas release after Shaolin Soccer. Kung Fu Hustle tells the story of wannabe gangster Sing (Chow), a loser who desperately wants to be part of the fierce Axe Gang, one of several gangs that now rule 1940s China. Sing and his partner Bone (Lam Chi-chung) pretend to be members of the Axe Gang when they arrive at Pig Sty Alley, a slum run by a fierce landlady (Yuen Qiu) and her husband (Yuen Wah). The duo’s plan fails, and the actual Axe Gang shows up. However, they are fought off by three martial artists living in the slum. The battle is one of the countless fights in the film that is executed perfectly.

Kung Fu Hustle is choreographed by Yuen Woo-ping, who became well known after choreographing Crouching Tiger, Hidden Dragon; The Matrix; and both Kill Bill films. Woo-ping crafts jaw dropping fight scenes in Kung Fu Hustle that are certainly on par with his previous work. The action scenes are fluid, and each blow delivered is connected smoothly to the next. Each fight is definitely something to behold, and fights in general are one of the film’s most astonishing features, but Chow’s blend of Chinese culture and the style of American cartoons is what will be most remembered.

In the United States, kung fu movies were at their height of popularity when Bruce Lee took the nation by storm. After his death, kung fu declined in the American market but remained strong in Asia. With the release of Ang Lee’s Crouching Tiger, Hidden Dragon and Chow’s Shaolin Soccer in 2000 and 2001, American began having a renewed interest in kung fu films. While Lee’s film had a much more serious tone, Shaolin Soccer was filled with more comedy and featured humor exceptionally well. Kung Fu Hustle contains the same blend and takes a more Looney Tunes style approach. The action scenes always have a hint of comedy in them, and from the addition of pinball sound effects when gang members are being knocked into each other to a very cartoon-style chase sequence, Kung Fu Hustle never fails to provide the laughs. This American style of comedy is also combined with traditional Chinese music, which many believe is Kung Fu Hustle’s most intriguing figure. Very few films can take two polarizing elements and combine them into a successful mixture of cinema perfection, but very few films are directed by Stephen Chow, whose style of Mo lei tau (which means madness) is implemented in most of his films and gives an audience that’s isolated from the culture and traditions of China and kung fu a way to enjoy films that they would usually find boring.

Kung Fu Hustle is the perfect kung fu film for American audiences. Roger Ebert described the film as “Jackie Chan and Buster Keaton meet Quentin Tarantino and Bugs Bunny” after he saw it at Sundance. Though Kung Fu Hustle doesn’t contain the themes and elegance of typical kung fu films, it does contain unique elements you won’t find in any other martial arts film. Kung Fu Hustle is one of the greatest martial arts movies of all time and is the perfect kung fu movie for American audiences.