Adrenaline in the Air 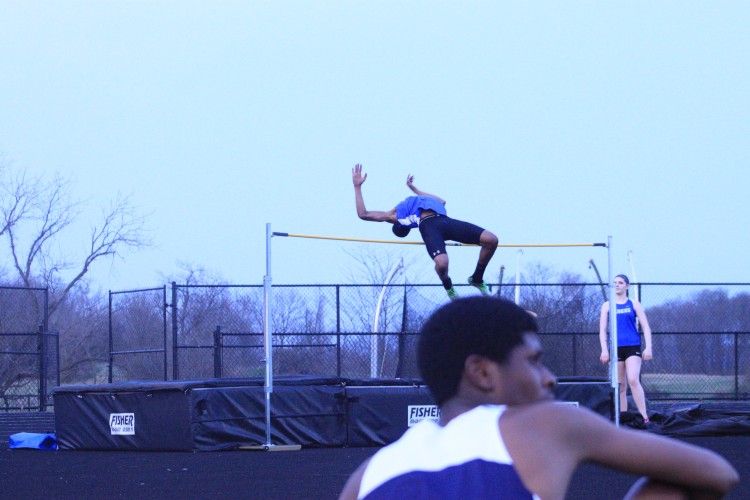 Having never been to a track meet before, I had no idea what to expect when I arrived at Briar Woods. While many spectators took a seat in the bleachers, I lined up at the fence with my Nikon in order to get the best shots of the runners. My initial expectations weren’t that high; it’s just running and jumping a few hurdles, right? I realized my own ignorance as soon as I heard the sound of the starter pistol. I watched in awe as the Huskies practically flew over the hurdles, moving forward as soon as their feet hit the ground, and I was suddenly captured by the sport.

“When you’re about to race, you’re pretty nervous but also excited,” says Abby Knuff, a freshman. “And when you’re actually running, you feel such adrenaline.” Knuff, in her first season on the team, loves track just for the sport itself. Having taken part in both racing and hurdling, she has gotten some good experience under her belt for next year.

By the looks of it, the track team is obviously one of unity. Almost every day, track team members can be seen proudly donning their track t-shirts, and the halls are filled with conversations about upcoming meets. While their teammates sprint and leap, runners cheer from the side of the track, constantly motivating each other to do the best they can.

Unfortunately, the Huskies did not triumph at Briar Woods. However, considering their victories against Loudoun Valley, Park View, and John Champe on April 10th, as well as Heritage and Loudoun County on April 17th, you can’t say they’ve done poorly this season. Besides, it can be the losses of a team that make it stronger.

In some cases, the excitement of a sporting event can dwindle if the team you’re rooting for is not as successful as you’d hoped. But the track team never ceased to amaze. When you hear the sound of the pistol and see them launch into a sprint, you’re on the edge of your seat, waiting for the first hurdle to appear. Right before they jump, you’re holding your breath, then you exhale as you watch them effortlessly glide over the obstacle and power through to the finish.

There’s nothing more light-hearted than the sound of cheering from the stands as the race commences, everyone hopeful for their school. Sometimes, they may be disappointed, but that doesn’t kill the buzz of excitement and adrenaline. If anything, it fuels the crowd, making them cheer louder, restored with the belief that they will win next time.

As I left Briar Woods, I wanted to turn back and stay just a few minutes longer, because, quite frankly, it’s an enthralling sport and the meets always keep you fully engaged. Never before had I witnessed such adrenaline in such a span of time, and my pride for Tuscarora had never been greater. It was the first track meet I went to, but it certainly won’t be the last.