In 2007, one of the greatest video games of all time (in my opinion) was released. Irrational Games’ BioShock was 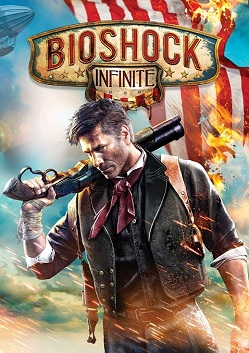 remembered for its engaging story, smooth gameplay, and fascinating story. BioShock took place in the underwater city of Rapture and explored Ayn Rand’s ideas of objectivism; it also featured a storyline based on the moral decisions one makes. Upon its release, the game received universal praise. A forgettable sequel was released, but in 2013 a new entry (but not direct sequel) was released. BioShock Infinite is not only one of the best games of the year, but one of the best of all time.

BioShock Infinite is set in 1912 during the rise of American exceptionalism, which is the idea that America’s mission is to spread liberty and democracy. The protagonist is Booker DeWitt, a former Pinkerton agent who tries to wipe away his gambling debt by embarking on a rescue mission to save a girl named Elizabeth.. However, Elizabeth lives in Columbia, a city that floats in the air. The city of Columbia is one of the most visually engaging settings you’ll see in a video game.

Columbia was created by the United States as a way of showing what you can achieve if you follow the ideology of American exceptionalism. After the Boxer Rebellion, Columbia seceded from the United States and became plagued by racial segregation and xenophobia due to the ideas of its leader, Zachary Hale Comstock. During your visit to Columbia, you’ll witness how the minorities are looked down upon by the majority and hear fearful comments about foreigners. Columbia also features more disturbing factors, such as the fact that its citizens worship George Washington, Thomas Jefferson, and Benjamin Franklin as gods. Visually, Columbia is stunning. The graphics of BioShock Infinite are incredible, but that’s not what makes the city pop. Infinite’s art direction is why Columbia rises above other settings found in video games, and it is even better than Rapture from the original BioShock. As soon as I arrived at Columbia, I spent quite a while taking in the sights and sounds of America’s forgotten city and making sure I noticed the little things like hearing songs that won’t be written until 50 years into the future. Throughout the game, players learn about Columbia through audio logs left by its civilians; the sights and sounds of Columbia makes it live and breathe like just Infinite’s characters.

As a first person shooter, Infinite is very different because it doesn’t contain a silent protagonist like those found in other popular FPS games. Booker expresses his views on what’s happening in the world around him and it makes him a much more interesting character. Booker isn’t the game’s most interesting character, though. Elizabeth is. Her character development is executed so well that by the end of the game she had become one of my favorite characters in any video game.Video games have always portrayed women using stereotypes, but Infinite strays away from that path because thankfully, Elizabeth isn’t completely useless. During combat, she will throw you ammo, health, and other supplies when you need it. She also has the ability to open up tears, which are alternate realities that don’t exist in the current world.

The gameplay of Infinite is very smooth. The combat is also enjoyable, mostly due to the different ways of approaching a situation. You may choose to pick off enemies using a sniper rifle or use a device called the sky-hook to ride Columbia’s skylines and get the jump on a group of enemies. Usually, combat tends to get pretty boring in a first person shooter, but the open-endedness of Infinite keeps it fresh. Booker has the usual choice of a pistol, machine gun, and so on, but can also use things called vigors. Similar to plasmids in the first BioShock, vigors are abilities, like throwing fireballs or summoning a murder of crows to attack enemies, which can assist you greatly in combat. Experimenting with vigor combos will reward the player with deadlier ways to eliminate enemies. Setting a group of enemies ablaze and then shocking them will have quite the explosive result. Alternating between weapons and vigors keeps the combat from going stale. Though it’s fun and enjoyable, Infinite isn’t exactly difficult. By the end of the game, enemies didn’t really seem as much of a challenge. However, beating the game unlocks the 1999 mode, which makes the game significantly harder.

What stands out in Infinite the most is its story. Lead writer Ken Levine told an amazing story in BioShock, and I was skeptical whether Infinite’s story would measure up. Thankfully it did, and it is even better than its predecessor. The story is engaging and will provide you with plenty of questions, like how is there a barbershop quartet singing “God Only Knows” by the Beach Boys in 1912? Rest assured, every question is answered in one of the most satisfying and mind blowing endings in fiction. The ending will stick with you and will no doubt make you think, something games don’t do very often. I hope future games take a note from Infinite and start to focus heavily on their narratives.

BioShock Infinite is a perfect example of why video games should be considered as art. Few games have created such a thought provoking setting and story, along with fantastic gameplay to boot. BioShock Infinite provided one of the most entertaining experiences I’ve ever had while playing a game and is definitely a big game changer when it comes to the future of video games.