Political Analysis: An Early Preview of The VA Statewide Races 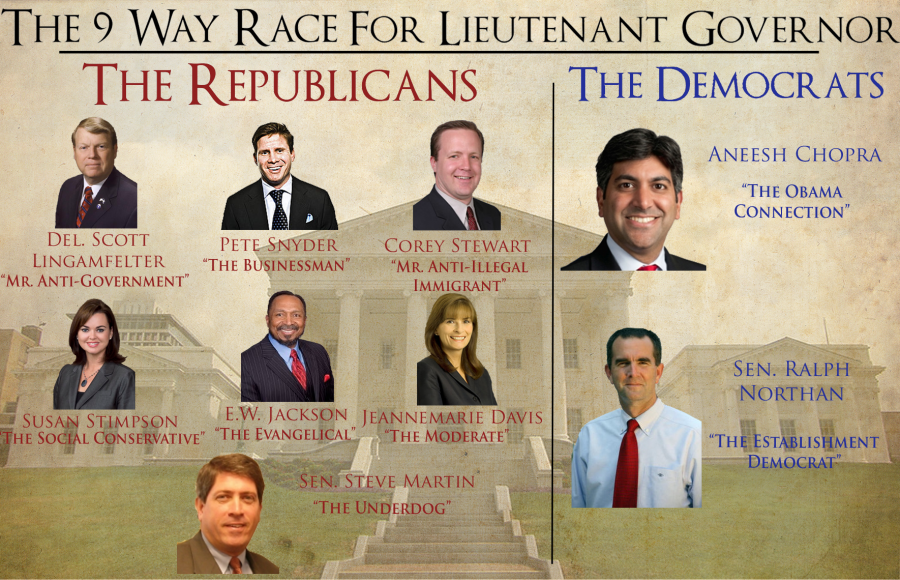 With the exception of presidential campaigns, March and April in Virginia are usually quite bland and empty months for politics. The state legislators have finished their annual session, but the governor hasn’t signed or vetoed all their bills, and, as usual, the only ideas and legislation to report on from Washington, D.C. are the lack of any new ideas or legislation at all. Beneath the thin, calm veneer of a non-political month, however, candidates from both parties are jockeying for position for the statewide races still 8 months away.

The race for governor is perhaps the most high profile race this election season, as Virginia is one of only two states in the country to hold state elections on years offset from presidential elections (the other state is New Jersey, where Gov. Chris Christie is expected to be re-elected). Virginia is also the only state that limits governors to one term, forcing immensely popular Republican governor Bob McDonnell out of office. The Democratic nominee is former DNC (Democratic National Committee) chairman Terry McAuliffe, and the Republican nominee is current state Attorney General Ken Cuccinelli. This race is shaping up to be a battle of the more radical wings of each party, as Cuccinelli is considered to be extremely conservative on many issues such as the role of government and social issues, and McAuliffe is considered to be even more liberal than many national Democrats. Right now, with the recent decision by Lieutenant Governor Bill Bolling to stay out of the race altogether, this race is projected to be an even 50-50 match, and will likely not shift until later this summer.

One interesting item about the Virginia governor’s elections is that in every election since 1977, the party that won the presidency loses the race for governor the next year, just as McDonnell won the governorship the year after Barack Obama won Virginia in his historic 2008 sweep.

Further down the ballot, the action becomes more intense. In the battle for Lieutenant Governor, seven Republicans are angling for their party’s nomination, and two contenders are fighting for the Democratic nomination.  I’ll just run through them quickly. Republicans: Scott Lingamfelter, State Delegate; Steve Martin, State Senator; E.W. Jackson, Republican activist; Susan Stimpson, Stafford County Supervisor; Jeanmarie Davis, former State Delegate and Senator; Corey Stewart, Prince William County Supervisor; and Pete Snyder, businessman.  This year, Republicans are choosing their nominee through a party-run convention in which the individual county committees select delegates who go to a convention in Richmond to select the nominee over a period of two days. As could be expected, this method usually nominates more conservative candidates, as most moderates tend to shy away from 2 days of standing in a conference hall listening to long and droning speeches. Most analysts predict a win by Pete Snyder, who is running a high quality technological intensive campaign, or Scott Lingamfelter, who has a strong Tea Party backing.  Democrats are selecting their candidates this year through a conventional, state-run primary, which is run using state money, and where anyone can vote at their usual polling place. This year, the Democratic candidates are Aneesh Chopra, a former Obama advisor, and Sen. Ralph Northam, a state senator. The race has been very close recently, but all indications show that Chopra may be moving ahead. He has recently won two Northern Virginia straw polls, indicating a firm base of support in the most Democratic region of the state.

In the race for Attorney General, two Republicans are competing for the nomination, as well as two Democrats. The Republicans are State Delegate Rob Bell and State Senator Mark Obenshain. Bell has earned conservative accolades in the past two years as the primary architect of a conservative property rights amendment, while Obenshain has long been known as a consistently conservative Senator. Bell appears to have a slight edge, but Obenshain should not be counted out, especially in a convention scenario. On the Democratic side, former federal prosecutor Justin Fairfax will be facing Loudoun County State Senator Mark Herring (who currently represents most of Tuscarora students). This is yet another race that is far too close to call. Herring recently won an influential Democratic straw poll, but it was only by 28 votes out of more than 300 cast, a lead that can be insignificant in a state-wide primary.

My early predictions for the ballot in November: