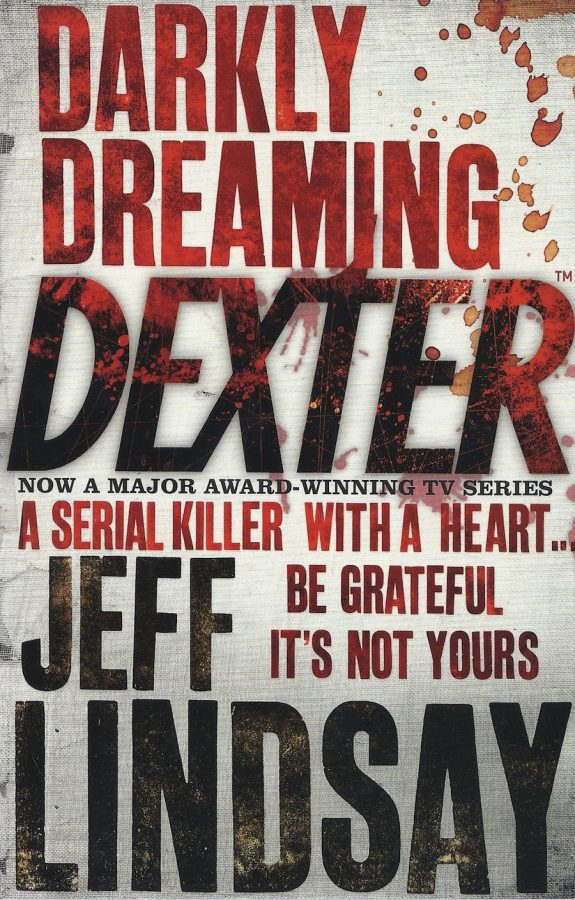 There so many crime shows and novels in circulation these days, and they all seem to have the same general plot line. Some horrible criminal commits a heinous crime leaving the cops disgusted, confused, and determined to catch him; the only variety is the varying degrees of how disturbing the crime is and mentally messed-up the psychopath may be.

Some fans don’t mind, but others are starting to get bored. Luckily for these unsatisfied crime enthusiasts, author Jeff Lindsay offers an intriguing and unusual alternative in the first book of the Dexter series, Darkly Dreaming Dexter.
Most crime novels and shows come from the point of view of the cop chasing a criminal. Darkly Dreaming Dexter is the exact opposite; its narrator is serial killer Dexter Morgan.
Reading from the point of view of the criminal is a vastly different experience. The criminal isn’t cryptic, and his motives aren’t incomprehensible, which is often the case in the average crime show or novel. Lindsay does a terrific job at taking a character whom the reader should absolutely hate and turning him into someone they sympathize with. Dexter is engaging and almost understandable. He never justifies his actions. In fact, he flat out admits that his actions are wrong, yet they seem completely reasonable. The readers often have to take a step back and remind themselves that what Dexter is doing is cruel and generally frowned-upon by society. In this way, Darkly Dreaming Dexter is already a new brand of crime novel.

Dexter Morgan is a serial killer who only kills other criminals.

Take a moment to appreciate exactly how revolutionary this concept is: a monster that kills monsters. No one has ever done anything like this in the crime/mystery genre. This novel opens so many possibilities, and crime show fans and mystery novel readers can expect new plotlines and exciting new twists as writers scramble to find an innovation to steal Lindsay’s limelight.

The novel grabs the reader’s attention from the very beginning and draws them even further in as the plot develops, gradually quickening in pace as the climax approaches. Despite the serious plot, the novel itself is surprisingly light and humorous, with cunning and fast-paced dialogue that leaves the readers chuckling quietly as they turn the pages in anticipation. There is never a dull moment, and the ending is possibly one of the funniest things I have ever read. My only complaint is Lindsay’s apparent obsession with alliteration throughout the novel, which was a little distracting.

Darkly Dreaming Dexter has received surprisingly little critical acclaim despite its revolutionary concept. On the back cover of the novel there are a few words of praise, and the book received the 2005 Dilys Award from the Independent Mystery Booksellers Association, but it has otherwise received little acknowledgement. On the other hand, the Showtime television series Dexter, which was inspired by the novel, has received a large amount of attention including 19 Primetime Emmy and 7 Golden Globes nominations.

Since the television series is so popular, many people simply watch the show and ignore the books that inspired it. The book, however, is preferable over the show for a variety of reasons. Although Michael C. Hall’s baritone voice is soothing and the dialogue is entertaining, the show’s plot feels rushed and confusing, with several cases overlapping each other. In comparison, the novel is more evenly-paced and easier to follow. The novel also doesn’t have the awkward close-ups, poor lighting, and the often quiet, mumbling dialogue that seem to dominate the show. The novel is preferable to the squeamish and weak-stomached because it only describes the macabre crimes, whereas the television show proudly displays the blood and gore for all to see. The television series also deviates from the plot of the novel, with key differences in the roles and back-stories of several characters. Whether it’s better or worse that way is up to personal discretion.