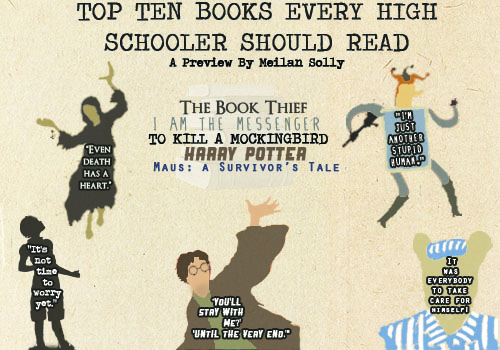 By: Meilan Solly
By the time most people reach high school, they have made a decision about reading. They either love, hate, or tolerate it. No matter which category you fall under, you should make a point to read at least one of the following books, all of which contain valuable life lessons…or, in the case of some, a well-needed comic break from the stress of being a teenager.

1.    The Book Thief by Markus Zusak
Even if you are not a fan of World War II, this book is a must-read. It offers insightful wisdom, touching characters, and a plethora of unexpected yet wonderful word combinations. Quick lesson: Learn to be brave in the face of adversity, and also value words, for they are more important than you might think.
2.    Nineteen Minutes by Jodi Picoult
Jodi Picoult, one of the most prolific realistic fiction writers of modern times, has written many novels for both teenagers and adults. This novel focuses on a boy named Peter who has been bullied all his life. One day Peter finds that enough is enough, and he embarks on a killing spree comparable to the real Columbine school shooting. Quick lesson: You never know how much bullying can affect someone.
3.    Maus by Art Spiegelman
Maus is actually a graphic novel rather than a book, but it does such a fantastic job of conveying deep meaning through seemingly innocent characters that it deserves a spot on this list. Also about World War II, Maus depicts the Holocaust through the eyes of a survivor named Vladek Spiegelman. What makes Maus so unique is that it shows characters as animals. Jews are mice, Germans are cats, and so on. Quick lesson: Memories are powerful, and the guilt they sometimes entail can be overwhelming.
4.    The Pact by Jodi Picoult
The Pact deals with one of the touchier topics in teens’ lives: suicide and depression. In the book, a young girl named Emily Gold is suicidal. She enlists the help of Chris Harte, a boy she has known her whole life and has been dating for several years, in order to concoct a suicide plan. Things go wrong almost immediately, however, as Chris is accused of murdering Emily. Quick questions: Can truth ever be absolute? How far will/should you go to protect someone you love?
5.  I Am the Messenger by Markus Zusak
Another wonderful book from Markus Zusak, I Am the Messenger will be more your speed than The Book Thief if you are into realistic fiction. In I Am the Messenger, Ed Kennedy, a 19-year-old cab driver with no real purpose in life, finds himself on a journey of self discovery after receiving mysterious playing cards in the mail. Quick lesson: Everyone has a story they want to share, and “sometimes people are beautiful. Not in looks. Not in what they say. Just in what they are.”
6. Speak by Laurie Halse Anderson
When a teenage girl named Melinda calls the cops at an out-of-control party, she is maligned by her peers. No one knows why she did this, but it affects her so deeply that she loses the ability to speak. Quick lesson: If you see someone going through a hard time, help them. Don’t ostracize them.
7.    To Kill a Mockingbird by Harper Lee
Most students have to read To Kill a Mockingbird sometime during their high school career. “Have to” is the wrong way to phrase it, however, as many high schoolers find they actually really enjoy the book. In To Kill a Mockingbird, a small-town lawyer named Atticus Finch and his children, Scout and Jem, learn about how unfair the world can be when they defend a black man accused of raping a white woman. Quick lesson: Life can be unfair, but you have to take it in stride. Also, maintain a strong sense of right and wrong.
8.    The Harry Potter series by J.K. Rowling
Almost everyone knows who Harry Potter is, but you might be surprised by how many people have seen the movies but not read the books. While the movies are quite good, the books are infinitely better. They show aspects of characters you don’t see in the movies, and also describe everything in much more detail. Quick lesson: Friendships and love are two of the most important things in the world.
9.    The Princess Diaries series by Meg Cabot
Mia Thermopolis is just your average teenager. She lives in New York with her mom, she loves cats, and she writes obsessively in her journal. One day, Mia finds out some shocking news: she’s a princess! This ten book series explores Mia’s journey from regular teenager to full-fledged princess, and while doing so provides a humorous light read that’s perfect for a stressed high school student. Quick lesson: Everyone has awkward moments, even (or in Mia’s case especially) princesses.
10.  Stepping on the Cracks by Mary Downing Hahn
This is one book on the list which is considered more of a children’s book than a young adult book, but as someone who adores children’s books, I thought I had to include at least one. Stepping on the Cracks is another book about World War II, but instead of focusing on the Holocaust, it tells the story of American children whose brothers are off fighting in the war. Quick lesson: Everyone has troubles of their own. Also, when it comes down to family versus duty, which is more important?