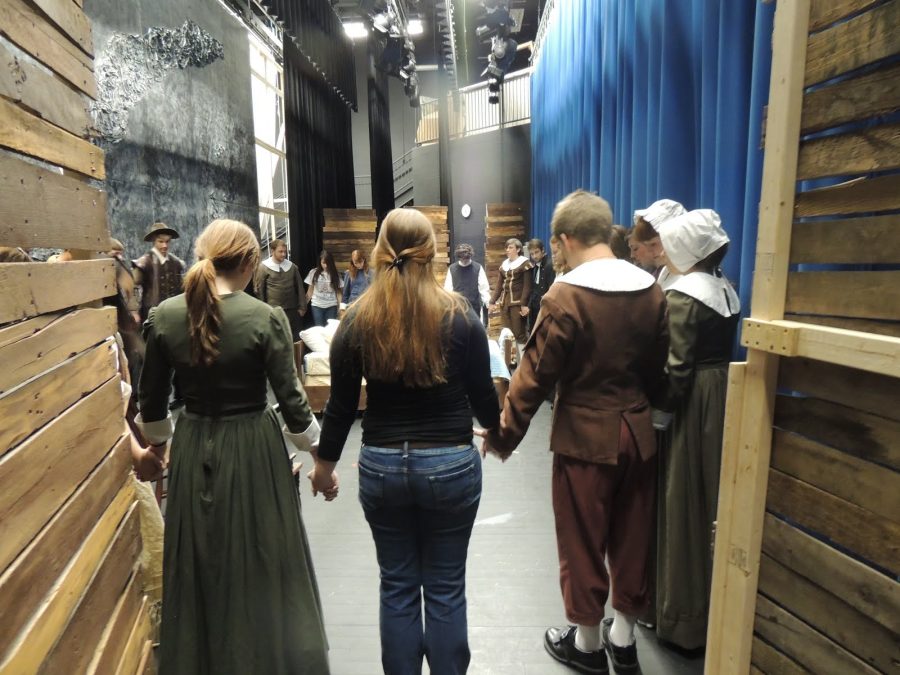 Dancing in the Devil’s lair, drinking a mysterious soup, and singing Barbados songs leads to the corruption of the Puritan colony of Salem, Massachusetts in The Crucible by Arthur Miller.

Late one evening, Reverend Parris, the Minister of Salem, discovers his daughter Betty, his niece Abigail Williams, and other girls dancing in the forest. The townspeople of Salem believe that the girls’ strange behavior is due to witchcraft. Rev. Parris decides to summon Reverend Hale, an intelligent scholar, to search for possible witchcraft, but he also denies the allegations of witchcraft in order to save his reputation. Abigail threatens Betty, Mary Warren (Goody Proctor’s servant), and her other friends, telling them to deny witchcraft -and the fact that Abigail drank blood to kill Elizabeth Proctor- or else she will kill them.

Abigail wants to kill Elizabeth Proctor because she is in love with Elizabeth’s husband John. During the winter, Abigail worked for the Proctors, and during this time she and John embarked on an affair. Elizabeth became suspicious of Abigail, so she fired her. The word spread about Abigail, and no one asked for her services since her name was blackened in the village.

Tituba, Parris’ slave, admits to witchcraft and mentions that the Devil has a group of witches in Salem. Abigail then discovers she can accuse innocent people in order to lead to Elizabeth’s death. Abigail and the girls began accusing townspeople of witchcraft and pretending the spirits of the Devil -sent from the accused- are hurting them,  Elizabeth Proctor being one of them.

Three weeks later, Mary Warren tells John and Elizabeth that thirty two people have been accused of witchcraft and about ten will hang. Elizabeth is one of the many accused of witchcraft, and the court comes to search her house. Cheever (a court official) finds a doll given to Elizabeth by Mary Warren with a needle stuck in its belly. Abigail had a needle embedded in her stomach that same night, so Cheever takes Elizabeth to jail. John’s only chance to free his wife is to prove Abigail a liar, but he has to confess to adultery in order to do so.

Sit. Stay. Watch! Productions performed The Crucible at Tuscarora on November 1st, 2nd, and 3rd at 7 p.m. each night. The main characters in the play included seniors Caely McHale as Abigail, Shelby Anderson as Elizabeth Proctor, Cameron Murdock as Judge Hathorne, junior Ben Fuhrmann as John Proctor, and many more.  The actors emphasized the emotional, serious, and funny parts of their characters, which made the show enjoyable to watch. In fact, I went to the show on TWO nights. The costumes and the stage for the play created a good sense of what Salem was like in the 1690s; the wooden walls, coat rack, the lengthy black capes, and the dialogue used in the play made me feel like I was a part of the Puritan community. In addition to the stage, there was a rock wall in the background with a red light glowing through the crack in the wall. Gradually, the gap in the wall grew, symbolizing the separation of Salem due to the belief of witchcraft.

Though all of the characters stood out in their own way, John Proctor’s actions and outbursts caught the audience’s immediate attention. Fuhrmann did a great job of portraying his character through  his emotions and the tone in his voice.

There were no hanging scenes in the play, which can be debated. Those who have seen the hanging scene in the movie appeared to have more sympathy for the characters, rather than those who simply read “so-and-so was hung.” I believe that it wouldn’t be necessary to have hanging scenes in the play, because it would be difficult to show them; however, if there had been a hanging scene, it would have made more of an impact on the audience. The show could have used dummies, but it would take time to cloth the dummy and hang it up; it would also be unrealistic. It would’ve been interesting to see, but I feel it would be hard to execute.  Senior Grace Cole, however, thought that “even though the play was amazing, the end[ing] was disappointing. I think they could have had a better ending built up on the suspense.”