I Demand A Column: Cruel Fate? 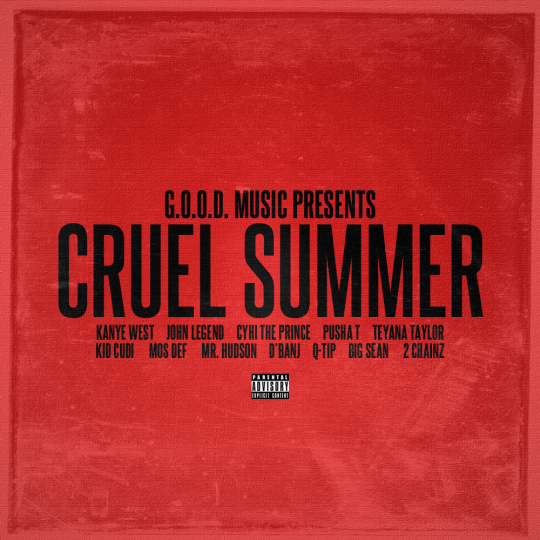 By: Danny Sedlazek
Kanye West is hip hop’s golden boy. Practically every album he has released has been declared a classic by the rock/mainstream-pres, and he still manages to have a handful of Top 40 hits off of each of his records. All of this in an industry that has seen artists fall out of fame within the same year of their breakthrough. It seemed as if he could do no wrong.
One of the major reasons West, also known as  Yeezy or Ye, has managed to attain the success he has, is his unrelenting dedication to changing his style. While I personally believe he rips most of his “style” from lesser-known artists, he seemed to be on the brink of a truly original Kanye West sound with My Beautiful Dark Twisted Fantasy in 2010.
That record was the culmination of his whole career: it brought elements of chipmunk soul from his College Dropout days, the lush orchestral instrumentation of Late Registration, the electronic grooves of Graduation, and the RnB influences from 808’s & Heartbreaks. Lyrically, the rhymes on My Beautiful Dark Twisted Fantasy  were simultaneously the most technically sharp and possessed the most emotional depth of any album he had put out thus far.
Yet it still left so much more he could grow on. It was a template that any artist wishes they could have.
When he announced Watch The Throne in 2011, a collaborative effort with mentor Jay-Z, we weren’t expecting much. It was supposed to be a fun record that cemented their legacy as the most successful rappers of the modern era. So when Ye wasn’t up to the standards of his previous LP, I wasn’t surprised or worried; he had two albums slated for 2012 that were sure to be better.
He announced a solo album whose only confirmed fact is its existence. (I put the date for one below, but  the other has no release date as of now.)
The other was a collaborative effort from his entire label, G.O.O.D. Music, which has a star studded roster featuring veterans Mos Def (who now goes by Yassin Bey) and Common, pop sensations Kid Cudi and Big Sean, and hardcore hip hop favorite Pusha T, to name just a few. Needless to say, the album is hugely anticipated.
Technically the G.O.O.D. project debuted on September 18th, but the album was leaked onto the web the week before. So I’ve had extra time to take it in, and wow…really Kanye?
Almost half of the incredibly brief album was released via singles, and everything that wasn’t already out was weak RnB fluff. Those singles, with the exception of the lyrically marvelous “New God Flow,” were all hype-rap songs with little substance and heavy trap influences. When trap-star 2 Chainz, who isn’t even on your label, seems most at home on supposedly lyrical label’s songs, you are doing something wrong.
It seems we’ve discovered Kanye’s newest style: hype-rap. Pitch-corrected snare rolls, flurries of hi-hats, and artificially deep vocals dominate the sound of this record. Lyrically, it’s some of the most boring flossing Yeezy has ever done. At least back in the day, while he walked the line between corny and clever far too often, he was never boring. He’s been out-rapped on every song he’s been on, but it’s not like he seems to be on autopilot; he just seems to be running out of steam.
The G.O.O.D. Music album, ironically titled Cruel Summer despite the fact that its release date is precariously close to autumn, just sounds like a pop-rap album where only one or two MCs actually seem to be trying on each song. It’s very sad.
Kanye’s other recent work that didn’t go into Cruel Summer has…well basically been nonexistent. This is really the first we’ve heard of Yeezy since 2011, besides his very public relationship with why-is-she-famous-again personality Kim Kardashian.
This is the first time I’ve ever been bored with Kanye. Even at his worst, he was at least interesting. Now, it seems like he’s running out of ideas and is just piggybacking on his younger protégées to maintain relevancy.
Unless his new solo album is the best thing since sliced bread, I think this group LP is the end of Kanye’s industry dominance.
Does this mean he’s going to stop selling? Not likely. He’s built up a huge a brand in an industry whose main selling point is name-recognition. But I doubt he’ll be the bar all other artists are held to by the mainstream any more.
Still, no one has become remotely close to occupying Yeezy’s pompus seat on top of the game. So the decline won’t be overnight.
Regardless of the accuracy of my predictions, one thing is for certain: Cruel Summer is a travesty, and will tarnish Ye’s name in the long run.