The Problem with Popularity and Politics 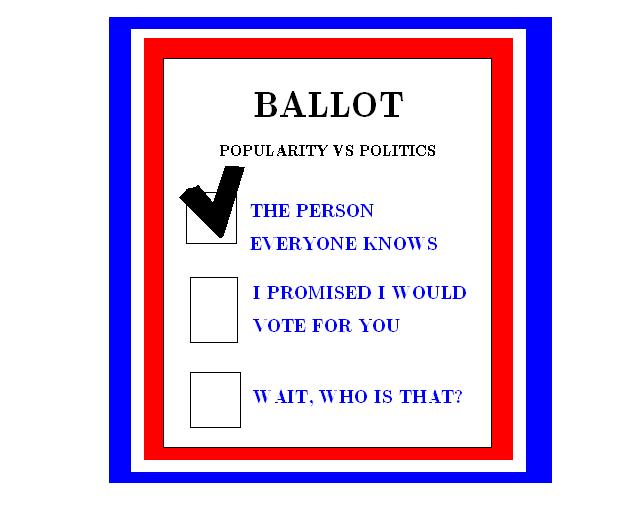 LEESBURG, VA- The word “politics” is a very loaded word. It opens up thousands of opinions and a lot of controversy.Even in high school, politics manage to complicate matters. While most students and teachers would agree that class elections give students a chance for their voice to be heard and offer better communication between the classes and the administration, the class officer yearly elections still seem to stir up frustrated emotions among the student body. The cause of this irritation has to do with another “P” word: popularity.

Everyone has a different definition of “popularity.” Some think it embodies how many people know your name and who you are. Other students think it is HOW those students know you, or rather, your reputation among your class.

For Osney Murphy, a sophomore who last year tried to run for President, popularity means the type of people who “[live] in their own little world and don’t see what happens around them, which is sad because there are more people outside their little club.”

No matter how the student body defines it, popularity still seems to have a large effect on who ends up winning the election. But while there are kids who grumble that student elections are purely a “popularity contest,” others find being “popular” a smart campaign strategy. It’s true that if a candidate wishes to win the election, he or she must convince the voters that they are the right choice for the job. Familiarity with fellow classmates is an especially important tactic for student candidates.

“I think a good percentage of it is popularity,” says newly elected freshman President Emily Ford. “I honestly don’t think I’m that popular, but I’m friends with a lot of people and I’m acquainted with a lot of people. I’m just trying to get to know everybody. And I think that really helped, just by trying to figure out everybody’s names, getting myself out there.”

Other problems exist within the election process. Many students said that they end up electing the person that they know, whether they believe they will make a good class officer or not, because they would rather vote for a person that is known to them than someone they’ve never talked to.

Caleb Allen, a sophomore voter, said that the campaign speeches that are shown a few minutes before the election aren’t enough to base a vote off of.  “If I know two of the candidates very well, and one of them is rowdy and irresponsible, and the other one is responsible, I’m going to vote for the responsible one. But if I don’t know the person, from their speech I’m not going to be able to tell who they are. I typically vote for the person I know,” he says.

If this is the case for most students, then it is no wonder why they feel the outcomes of student elections to be predictable. If everyone merely votes for the most familiar face, then the student who is the most active in school, has a widely-known reputation, or has the most friends, will receive the most votes. And despite the fact that candidates are allowed to put up posters around school advertising themselves to the student body, they seem to be ineffective in showing the voters WHY they should vote, just that they SHOULD vote. By voting day, most students arrive to advisory already thinking that they are going to chose to vote for their friend or a person they know most, because it seems to be a wiser decision than choosing someone they know nothing about at all.

“If I’m going to vote for somebody to be a leader, I want to know how they’re going to be a leader. I don’t just want to close my eyes and pick one,” says Gina Edivan, a junior.

That is not to say though that the most “popular” choice is always a BAD choice. Students like freshman Austin Martinez think that the class officers elected for their class in previous years and this year proved to be able to handle the responsibility.

“I agree that [the class officers] are popular, but I don’t think it’s bad that they are well known.  They will be able to get more opinions on what the student body wants.  I want to be able to know them so that I can trust them,” Austin says.

Laura Vasquez, a two-year President for the sophomore class, believes in her fellow classmates’ ability to make the right decisions. She says, “After you go past the ‘friends’ aspect, people actually care about who they elect. They’re not just going to elect any other person because they’re cute or something. People are realistic.”

Realistic or not, kids seem to be generally indecisive about how they view student elections. As much as most of them hate that the most “popular” student wins, they themselves tend to vote for their friends too.

Osney says what most students seem not to realize while they feel frustrated by the election results: “I’m biased.  I vote for my friends because I’m a good buddy.  It’s not different from the other kids. We’re all just a bunch of kids who are voting for our friends. We don’t take this how it should be taken. It’s not really like actual politics, because you vote for the person you like, not necessarily who will be right for the job.”

But Caleb brings up another issue with the election process.  “In an actual election, people have different viewpoints, but typically in our school, we don’t have opposing ideas being thrown around. Obviously a goal of someone would be to make homecoming great, but both candidates are going to want that. The student council doesn’t typically vary based on the person that’s running it. Really no matter who you vote for, nothing is really going to be different between candidates.”

So if this is how students feel when class officer elections come around each year, there is definitely something that needs to be changed. Obviously not everyone can be satisfied, but there seems to be too many students complaining of unfair elections, even though EVERYONE got to vote. At the end of the day, each officer is only in their position because of the student body’s votes. So if the candidate that you think deserved to win didn’t, whose fault is it really? Can one blame the student population for voting “wrong,” or did the candidate not try hard enough in advertising their campaign?